Many will say that there is no difference between transgender and transsexual people. However, trans people see these words in a different light, and they have strong opinions about them.

The word transsexual is the first one that came about. It describes people that don’t identify with the sex they’ve been been stuck with since birth. What’s more, they undergo surgical procedures to successfully change their sex and feel more like their true selves.

The term transgender is more fluid, however. By definition, you could say it mens the same thing as transsexual. However, transgender people don’t always go through the process of changing their sex to match their gender.

What inspires people to explore the idea of being transgender or transsexual is not feeling like themselves. For example, someone could be assigned as female, but they identify as a male instead. That’s what it means to be transgender.

How Do People Perceive These Differences?

We all have a gender identity. For some, it simply doesn’t match what they’ve been assigned at birth. Unfortunately, many people don’t understand that gender is fluid. People could identify with whatever they want to feel more comfortable with themselves.

Sadly, though, there’s so much stigma around being transgender that trans people are often shunned from society. They could be disowned by their loved ones, lose friends, or be rejected from potential jobs no matter how qualified they may be, all because of their gender identity.

Society often sees trans people as weird or wrong for feeling the way they do. No matter how many cool trans facts you tell them about, the opinions rarely change. So, how do trans people deal with this? They do it by being unapologetically themselves.

Society has no choice but to accept them, and things are finally changing nowadays. Different gender and sexual identities are finally being accepted worldwide. This means that trans women and men can finally have friends, land jobs, and be themselves freely without constantly worrying about their safety.

Of course, there are always exceptions to every rule. But people are becoming more liberal and accepting, which makes the whole LGBTQ+ community feel more at ease.

What Are the Limits of Being Transgender and Transsexual?

One of the transgender facts people know is that you can rarely manage to be yourself. That’s because there are a lot of limitations to being transgender. Society gives us a set of acceptable rules, and everyone needs to follow them.

Stepping out of the norm only causes society to cast you out. One of those rules is always looking ‘the part.’ That means you need to look like the sex you’ve been assigned at birth. But what if you don’t identify with it? Well, that’s too bad because you have to try and fit in regardless.

Before figuring out they’re transgender, people live their lives as any other person does. They just feel different inside. Once they want to start changing their appearance, they bind their breasts to make them appear flat if they feel male or start dressing more girly if they feel female.

Going through the process of sex change makes a lot of difference. Why? Well, it allows trans people to finally ‘look the part’. Many of them end up changing their names and sex in their identification so they can finally be who they truly are.

Effects of Being Transgender

Being transgender affects you and everyone around you. However, this doesn’t mean that the effect will be negative. Once someone figures out they’re trans, they can feel a huge relief. Suddenly, all of their feelings and behaviors start making sense.

The people around them can choose to react positively or negatively. The only thing that should change is how your loved ones refer to you, but, unfortunately, things can really take a turn. Families can cast their loved one out simply because they’re transgender. This is all because people don’t understand what being transgender means.

Transgender people are usually the first to fight against injustice towards other people. They’re in the front lines of all protests and riots because they know how it feels to experience so much inequality. This is how trans people help change and shape our society today. 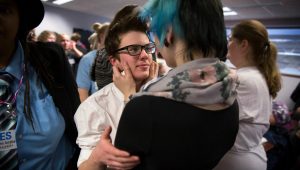 Effects of Being Transsexual

Being transsexual is a bit different. Now that we know some transsexual facts, it’s no wonder that this is rarely what people identify as. However, it’s not unheard of for transgender people to change their identity to transsexual. This may be because they went through the sex change and feel like transsexuality describes them better.

On the other hand, they want to reclaim this word, give it power, and erase all negativity tied to it. Unfortunately, since this word is so negative, transsexual people can find themselves arguing with fellow trans people about their identification.

Transsexual people also help change the world we live in today. They’re actively trying to erase the stigma of being trans and identifying as transsexual. They believe that just because a word had a negative meaning before doesn’t mean it has to be negative today.

Everyone should educate themselves on trans rights and issues so we can support these people better and accept them as rightful members of society.